Project Details
Anyone you ask would say that the name John Q. Hammons in synonymous with the tradition of building premier structures. The Chateau on the Lake is one such structure, and is an icon of the Branson area, and a magnificent hotel, to say the least.  It was a long time desire of Mr. Hammons to build a luxury hotel in the Branson area, and the hotel that he built is luxury in every sense of the word.  Prestressed Casting Company has a history of working with Mr. Hammons, providing the precast concrete products for several of his projects in the past. With that in mind, We were called upon in the early stages of design to help define and economize the structural portions of the project. We worked closely with the concept architect, working out many of the difficult structural details far in advance of the actual design stages.

This early design cooperation led to a precast concrete and steel gravity frame hotel structure as well as an all precast parking garage that is housed under and around the convention center. By utilizing our 48” deep Double Tee members, we were able to clear span the 128’ convention space and easily support the moveable dividers that could split the space for smaller functions. The convention floor had to be able to handle very heavy loads such as RVs and large crowds. This was accomplished again by using a double tee floor system and topping, which in turn gave a space below the convention center for parking, a necessity that would enhance the appearance of the structure as well as use much less of the valuable site space.

The hotel portion of the structure was equally challenging, but by using a combination of flatslab decks, horizontal shear wall panels, and steel gravity frames, we were able to erect a quality system quickly and effectively. The only catch was that the lower two levels had to remain very open to facilitate the many service areas and guest hospitality areas. The solution was to elevate the entire gravity frame system above a hybrid column, beam, and wall panel system. The spans between columns needed to be fairly large, but there was not enough head height to use excessively deep beams. By combining the beam with the wall panel on the floor above, through a series of connections that ran though the floor deck, we were able to effectively carry the resulting loads with a 24” deep beam section, even at spans beyond 35’.

The gravity frame system allows for very rapid construction, and in this case, the ability to erect the structure in two phases, which was necessary due to site conditions and the necessity to erect the atrium enclosure frame from inside the atrium. After the enclosure frame was secured we then could move outside the structure and finish the final leg of construction, completing the fourth side of the atrium from the ground up. The gravity frame system also facilitated excellent sound transfer characteristics, as well as superior fire resistance as compared to other construction types. The gravity frame system’s flexibility allows for very custom designs, but it is most effective in hotel or condominium work where the modular nature of the structure gives repetition to the products. It is a very durable system with a track record of speed and economy.

Due to schedule restrictions, most of this work was performed through the winter. Knowing that a potential grout curing problem existed, we changed the entire grouting process for this project. By using a poured grout joint, and by extensive use of heating blankets and enclosures, we were able to continue to work through the cold conditions, and ensure that the grout was cured in the proper manner. This was a key to meeting the aggressive schedule set by the owner.

This project was very difficult and complicated, and the weather conditions just amplified the problems. We faced shipping, erection, production, and design obstacles that may have been overwhelming if they had not been addressed and solved early in the design phase of this project. The result is a project that all involved can be very proud of, and one that will be there to enjoy for many years to come. 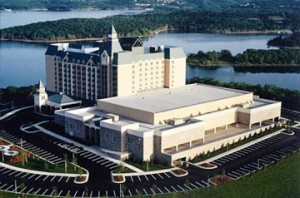 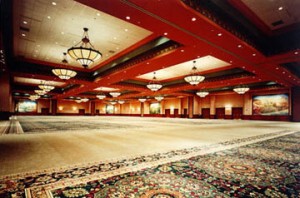 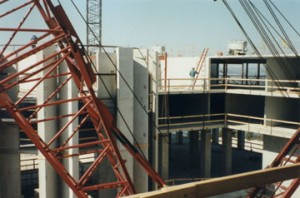 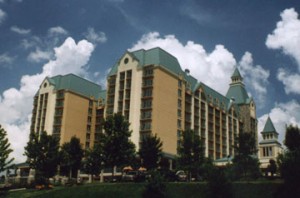 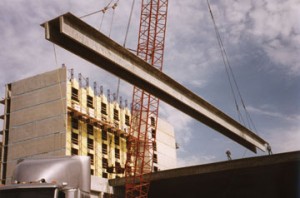 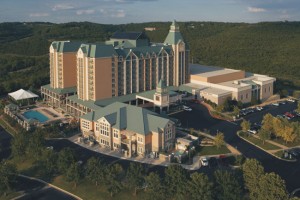