The Greene County Justice Center project had a great need for site space, but a considerable lack of it. The facility needed to house approximately 390 beds for the expansion to the existing jail facility, and it needed to house the entire sheriff’s department, as they had outgrown their existing facilities. All of this had to meet current correctional facility standards, and it had to happen on a tiny site that previously served as parking for the courthouse. It became clear very early on that the optimum solution was to place the jail above the sheriff’s office, but the jail cell loading was immense, presenting a serious framing challenge.

By working closely with our firm during the design stages of the project, a solution for the framing was found. The second level would be built on a superstructure consisting of 50” deep prestressed double tee decks, with additional cast in place topping. These decks would span over a very heavy column and beam system, and would be supported by the exterior walls with an integral “yoke” beam. The lower level was left very open by using the column and beam supports, with the only walls extending into the lower levels being the minimum shearwalls needed, plus the stair and elevator towers. The architect then had the freedom to design the lower office layout in the most effective way. The cell system on the second level was also entirely precast concrete, using flat horizontal walls and transverse spanning decks to enclose the cells. This entire system of cells was built on top of the high-capacity double tee deck, almost as if the cell system was an entirely different structure being constructed inside the shell of the justice center. To facilitate economy the exterior walls not only served as support for the structural framing, they also featured an architectural finish, which included a vertical ribbed pattern at the lower level to accent the structure as well as a variable reveal pattern. The walls were further complicated by casting insulation into the panel in a sandwich fashion. These walls served triple duty and definitely helped the project move forward much more efficiently.

The complexity of the framing was closely paralleled by the complexity of the construction sequence. The small site had to facilitate two cranes and erection crews, and the delivery of precast to each crew. This sequence was carefully mapped out as the construction of the facility was cut into four segments, with each segment interlaced with those adjacent to it. The tight construction schedule along with very difficult framing dictated detailed planning very early in the project to insure that the products we cast could actually be erected.

The Greene County Justice Facility is among the most technically advanced correctional facilities in the nation, acting as an example of how to efficiently build this type of facility. This is due in part to the unique framing and solutions provided by using prestressed concrete products from Prestressed Casting Co. 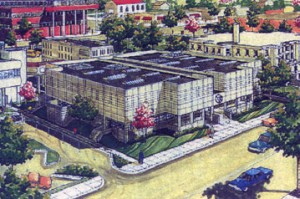 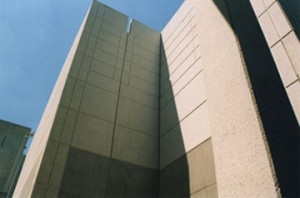 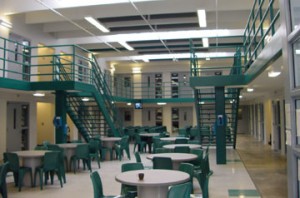 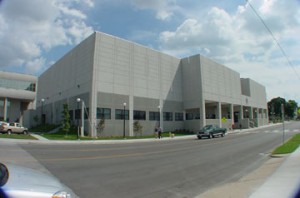 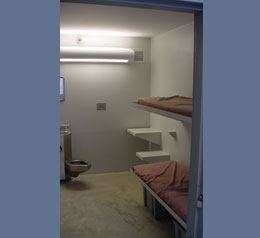 Precast Design and Construction of the Greene County Justice Center

Precast, prestressed concrete was used successfully to provide the new Greene County Justice Center (Missouri) with a detention center that doubled the capacity of the existing facility. The new building is sandwiched by a historical limestone courthouse on one side and a modern precast concrete courthouse on the other, so the new addition had to blend architecturally with the contrasting construction forms. Precast concrete provided both the architectural skin and the structural system to handle all design loads, and it had the added benefit of furnishing a durable cell partition that would be easy to clean. Special framing in the form of deep, thick-flanged double tees supported by heavy beams, columns, and loadbearing wall panels were needed to meet the criteria for a wide open layout. This article presents the design considerations and construction highlights of the project.

In 1998, Greene County, Missouri, had a pressing need to double the capacity of its inmate housing facilities in Springfield, Missouri. County representatives toured similar facilities under construction in neighboring states and were particularly impressed with the design and construction of a new precast concrete detention facility in Tulsa, Oklahoma. The success of the Tulsa project was a major influence on Greene County’s decision to select precast concrete for its Springfield facility expansion program.

After several interviews with a number of firms, the County selected Flintco Constructive Solutions as the construction manager and the joint architectural team of BKL, Incorporated, and HDR Architecture as the project’s designer. These two companies had worked successfully on the Tulsa project and had the same responsibilities. Bill Knowles of BKL had designed a number of area detention facilities with precast concrete and liked it for its excellent durability, cost effectiveness, and functionality.

The new building was to be sandwiched by the historical courthouse constructed of local limestone on the south and a modern precast concrete courthouse building on the north. For the new structure, precast concrete appeared to be the logical material choice for two reasons: First, it would provide the insulated architectural skin as well as the structural system to handle gravity and lateral loads. Second, precast concrete would yield a durable and cleanable jail cell partition.

Greene County required that inmates be able to move securely between the new courthouse building and the second floor of the new jail and between the second floors of the new and existing jail buildings. This provision dictated that nearly 200 additional two-inmate cells would be located on the second floor and the elevated mezzanine level of the new jail and that the administrative, classroom, kitchen/dining, and mechanical equipment spaces would be located on the ground floor. These areas required large open spaces without columns or shear walls that would interfere with visibility.

SPECIAL FRAMING for this PRECAST PROJECT

The architect and engineer knew that it would take special framing to span 64 ft (13.5 m) and be able to transfer all loads from the cell units and the 100 psf (500 kg/m2) live load from the dayrooms to the first floor. To solve this problem, Prestressed Casting Co. of Springfield, Missouri, proposed a second floor system of deep, thick-flanged double tees to span the 64 ft (13.5 m). These double tees would be supported by heavy beam and column framing or loadbearing wall panels.

The precast system appeared to solve the difficult structural problems while meeting other layout and clearance criteria, and the details of this scheme were incorporated into the working drawings. Prestressed Casting Co. continued to provide input to the architect and engineer on framing, architectural treatments, specifications, and budget issues throughout the design phase. In the late summer of 1999, bids on the precast package were submitted to Flintco, and Prestressed Casting Co. was selected to fabricate and erect the structural and architectural precast concrete at a contract price of approximately $3.5 million.

The precaster began the shop drawings, and Salmons P.C. of Albuquerque, New Mexico, who had worked with the precaster throughout the preliminary framing scheme during the design phase, was contracted for engineering services on the project. The design was to comply with the 1996 BOCA Code. The structure is totally precast concrete, with lateral stability provided by precast shearwalls. While seismic requirements for this area are not high, it governed the design in this case.

Numerous engineering challenges needed to be overcome. For example, because of the large open spaces required on the ground floor and the heavy dead and live loading from two levels of cell units and dayroom areas above, a 50 in. (1270 mm) deep, 62 ft (18.9 m) long double tee narrowed to 7 ft 6 in. (2.29 m) wide (to correspond to the cell widths) was designed for the span.

DESIGN DETAILS for this PRECAST PROJECT

The erection and construction sequence dictated that a 4 in. (102 mm) flange be utilized so that two levels of cell construction could be erected before placing the cast-in-place topping, thus freeing up precast erectors to continue their work with little interference from other trades. The 4 in. (102 mm) flange accommodated a straight strand design, which greatly improved member performance in terms of camber and deflection.

The massive double tees had to carry an equivalent unfactored uniform loading of 375 psf (1830 kg/m2), not including the topping, and had factored individual stem reactions of up to 95 kips (422 kN). Under all loads, the members are virtually level and are designed to deflect less than 1/4 in. (6 mm) under the application of maximum live load from a position of sustained live load.

The heavy stem reactions required special end support systems for the double tees. At interior column lines, an L-beam was considered, which would have provided more vertical clearance than a rectangular beam, but with desired tee bearing lengths of 10 in. (254 mm), it would not have been able to resist the torsional stress. Finally, a 32 x 56 in. (813 x 1422 mm) rectangular beam was designed to carry one end of the second floor double tees as well as the 9 in. (229 mm) loadbearing cell backwall. This beam supports an unfactored superimposed load of 21 kips/ft (306 N/m) and spans 30 ft (9.14 m). At the exterior wall, a 12 in. (305 mm) thick insulated wall panel with an extended yoke was designed to carry the other end of the second floor double tee. The yoke extends 12 in. (306 mm) and consists of a 16 in. (406 mm) deep beam section spanning the width of the panel to pilaster sections along each edge.

FABRICATION AND ERECTION for this PRECAST PROJECT

Precast component fabrication and erection were both performed by the precaster’s own equipment and personnel under a very tight schedule and restricted conditions. The start of manufacture was delayed by rebidding of subsequent mechanical, electrical, security, and other bid packages, which in turn delayed coordination of blockouts and other details.

Fabrication of the precast concrete components began in January 2000. Erection started in late April 2000. Two lanes of Boonville St. were closed to accommodate the construction. Workers had to direct traffic so that the trucks could get in and out of the project site. Further complicating erection was the presence of an antenna tower with guys within 10 ft (3.05 m) of the north elevation of the new structure.

After the first bay was erected, working footing to roof and backing out of the bay setting all precast components as erection proceeded, a second crane and crew joined the process as planned for approximately 50 percent of the work. The original crane and crew buttoned up the final bay and completed the front elevation erection. The remainder of the work was routine.

CONCLUDING REMARKS for this PRECAST PROJECT

In eight months from January to September 2000, 1286 precast concrete components were manufactured, hauled, and erected. Flintco vice president Bart Boatright, in a letter to Prestressed Casting Co. president Bill Johnson, stated: “With a project that provided many challenges with design and installation, your team successfully worked through all these challenges and provided great expertise and quick resolutions to the various difficulties that occurred throughout the construction.”

Presiding commissioner David Coonrod commented, “I enjoyed watching the construction as the very complicated erection process moved to completion. We have had rave reviews on the functional layout, the crisp clean cell surfaces, and the overall appearance of the new facility. We are especially pleased that a local company played such a major role in the new jail construction.”
The nearly $19 million jail addition, housing 390 inmates, is now open and functioning very well. In retrospect, the objectives of the county and the design-construction team have been fulfilled.