Every growing university runs into a parking problem at some point, and Southwest Missouri State University was no exception. The campus had become landlocked, and parking was at a premium. The solution was to go up, and the Park and Ride project was born. S.M.S.U. could have used several different forms of construction for their new parking garage but both the university and the designers quickly realized that precast concrete was the fastest and most economical solution for the new parking structure. As design commenced, it became very apparent that schedule would be vital in successfully building the new garage. The schedule had to fit around the heaviest traffic and student load, and this would be a challenge. Prestressed Casting Co. played a key part in making the schedule work. By using a pre-topped double tee deck, the amount of cast in place concrete was kept to a minimum. Another great time saver was the use of load-bearing spandrels with an architectural finish. By combining a pre-finished, load-bearing member into one unit, the piece count was kept to a minimum. These two items, along with an innovative erection system, kept the total precast concrete erection time below 100 days.

Speed was not the only advantage to using precast concrete. The designers wanted a two color, exposed aggregate exterior finish. By using precast concrete, the finish was easily achievable at a reasonable cost, and under closely controlled plant conditions. Durability was also a factor, thus making the pre-topped double tee system an excellent choice. Because the tees are plant cast, the concrete mix and steam heated curing are closely controlled, giving an extremely durable surface that could not delaminate and would be resistant to surface erosion. Visibility and security were also important factors. By using a “Light Wall” system and openings through the shear walls, both security and visibility are excellent. Also the use of increased spans mean fewer columns in the structure, which is important for visibility as well as economy.

The combination of speed, finish, durability, and openness all were vital to the Park-n-Ride facility’s success, and the quality of the structure is a testament to the university’s commitment to their students. 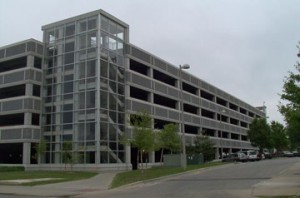 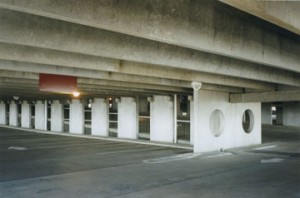 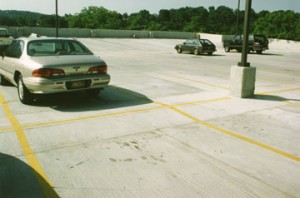 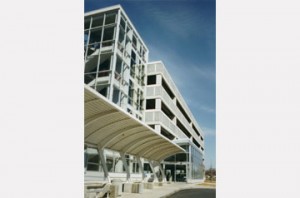