Typically any project involving a university and a sports facility has a very condensed construction schedule. This was especially true of the new Plaster Sports Complex project at Southwest Missouri State University. The university was in the process of expanding its football program, and in need of an up-to-date facility. The only downside was the time element. The stadium project, once started, had to be completed before football season began. The other challenge was that this new addition had to be constructed up and over the existing facility, which had served the university since 1941. With a need for speed and a cantilevered riser design, precast concrete became the best solution.

The slightly curved riser deck was accomplished by using 16 sets of riser beams, with a single tee riser section. This deck was built over a precast structure that houses all of the support facilities for a stadium, plus racquetball courts, locker rooms, and a state-of-the-art fitness center. The structure includes over 60,000 square feet of double tee decks and 10,000 square feet of untopped double tee ramps. The stair and elevator towers are also precast concrete, and support the skyboxes and media use areas of the stadium as well. The exposed wall panels and towers, as well as the riser fascias, have a sandblasted limestone aggregate finish, which has been used extensively around the campus.

As stated, the true challenge on this project was schedule. Prestressed Casting Co. was given a contract in mid April, with the stipulation that the precast be complete by August 19th. The only way to accomplish this was to increment the design and production to match the construction sequence. The project was designed and submitted in stages, which allowed us to cast the products that we needed first, even before the design drawings for the remainder of the project were complete. This type of incremented design required very close coordination with both the design architect and the general contractor. Casting of product started in mid May, with erection of precast products starting June 20th. We completed erection in mid August, finishing 3 days ahead of schedule.

The stadium opened on time due to the hard work of the entire construction team. However it would not have been possible without the timesaving, and structural advantages of framing with precast concrete. 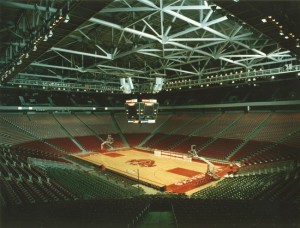 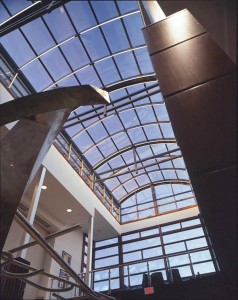 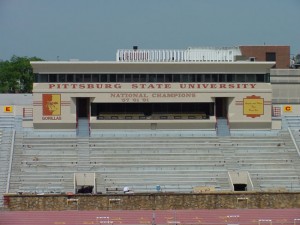 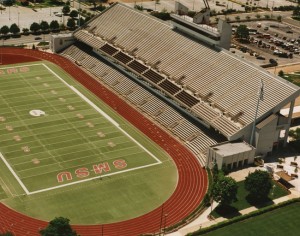 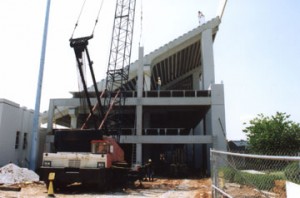